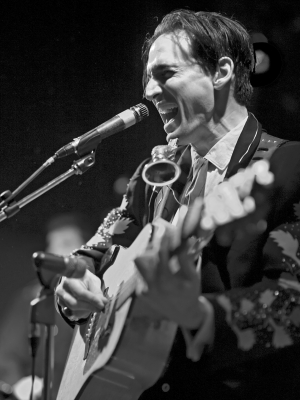 Having already conquered North America, the band are now looking to win over UK audiences with their visceral, mesmerising live show on this, their second European tour.

Led by the idiosyncratic Petunia, a former busker born in Quebec, the Vipers have become nothing short of a sensation in their native Canada, touring a bevy of madly infectious, dance floor filling songs the length and breadth of North America to thunderous acclaim. Picking, grinning and singing for his living, Petunia has been a regular on the Canadian and US touring circuit for many years, playing 150 shows a year all over America. He has an utterly unique, surreal style all of his own with live performances that have been likened to an avant-country night club scene from a David Lynch movie.

Although rooted in country and rockabilly, the band’s sound is ever shifting. Petunia loves to keep crowds guessing, often throwing a Spanish Ballad or Chanson a la Edith Piaf into the set, captivating audiences with high and lonesome vocals that bring to life the ghost of Jimmie Rodgers, or letting rip as he demonstrates his fantastic yodelling prowess! Petunia and the Vipers thrive on the challenge of adding Latin rhythms to a country blues tune, or gypsy flavouring to a rockabilly standard. Petunia defies convention, and his honest, cut to the heart songwriting and multi-syllabic narratives would leave a lesser singer tongue-tied and breathless, but somehow he manages to conjure up a sound that is at once magical, electrifying and unique.

“Petunia has packed clubs and theatres across America the good old fashioned way, by hard touring, word of mouth and putting on really sensational shows” said Town Council Arts Officer Chris Jones. “All the reports from Canada and the USA are of breath-taking live performances in every sense. Petunia is the real deal, slipping effortlessly from genre to genre, heading up a crack band featuring some of Canada’s very finest roots musicians. They may still be a well-kept secret in the UK, but I don’t think that’s going to last for very long. Come and see them in a small venue while you still have the chance!”

PETUNIA AND THE VIPERS

More in this category: « Veterans of Selby music scene, Phluid, back for reunion gig Concert pianist brings Fascinating Rhythm to Selby »
Login to post comments
back to top