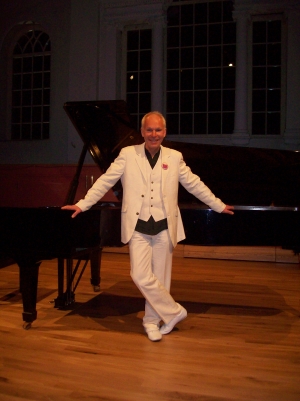 Phillip’s enormously popular show has played to sell out audiences from New York to Dar es Salaam. It is an evening of irresistible charm and sophistication, recreating the nostalgia and dazzling, toe-tapping stylish jazz of the 1920s and 30s featuring George Gershwin at his very best with Rhapsody in Blue and I Got Rhythm, plus Jerome Kern’s Smoke Gets In Your Eyes, Irving Berlin’s Cheek To Cheek, Scott Joplin’s The Entertainer and many more.

More used to performing in venues five or ten times the size of Selby Town Hall with the likes of the Royal Philharmonic and BBC Concert Orchestras, Phillip is recognised as one of Britain's most sought after and innovative concert pianists. He has gained enormous popularity for his unique abilities in both the classical and light music repertoire where his rapport with audiences, warm humour, brilliant technique and innate sensitivity win him the highest of praise. Phillip often broadcasts on BBC Radio 3 and Classic FM, performs regularly with the most prestigious orchestras and has a fantastic international reputation in Europe, America and beyond.

Phillip’s upcoming recitals include a showcase London concert at St Martin-in-the-Fields, concertos with orchestra and numerous UK festival and theatre appearances. Concerts in Spain, Ireland and Scotland are an annual feature along with tours to the USA, which this year feature a week of concerts in New York City, including the Bruno Walter Auditorium at the Lincoln Center, and a headline spot at the Scott Joplin International Ragtime Festival in Kansas. A further tour of California, summer concerts in Seville, more BBC broadcasts and a new CD release are also scheduled.

Phillip’s albums featuring the piano music of Billy Mayerl and Scott Joplin are currently heard almost daily on Classic FM, while his popular recordings as soloist with the BBC Philharmonic Orchestra and his live double album from the Purcell Room on London’s South Bank have both received considerable acclaim.

“This is another great coup for Selby” said Town Council Arts Officer Chris Jones. “It’s our first full scale, evening piano recital at the Town Hall and it features one of the country’s most highly regarded concert pianists. We’re absolutely thrilled that Phillip has agreed to a one off performance in one of the most intimate venues he will have played in many years.”

More in this category: « Canadian acoustic roots stars heading for Town Hall gig Edinburgh Festival hit 'The Rain That Washes' comes to Selby »
Login to post comments
back to top