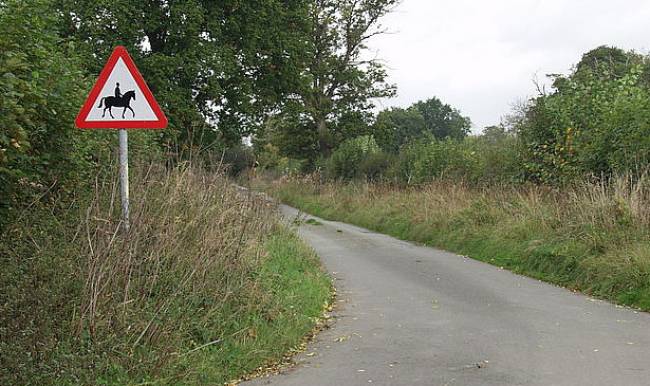 An operation to safeguard vulnerable road users will help protect horses and their riders in North Yorkshire.

Police are urging horse riders to report details of any dangerous or anti-social driving they have witnessed, as part of its Operation Spartan programme.

Spartan encourages members of the public to submit intelligence regarding poor driving and anti-social use of vehicles, via a driving concern form on the North Yorkshire Police website. The form captures the details of the incident, and requests information such as vehicle registrations, so police can carry out relevant checks and follow up with engagement or enforcement if required.

Motorists are being urged to follow four simple steps when passing horses:

2. Be patient, don’t sound your horn or rev your engine

In the last five years, there have been more than 167 road incidents involving horses in Yorkshire reported to the British Horse Society, causing the death of two riders and nine horses.

PC Hannah McPeake, of North Yorkshire Police’s Rural Taskforce, said: “Vehicles being driven too close or too fast past horses is a major concern for North Yorkshire’s equestrian community. Although rare, collisions can result in very serious injuries, and even near-misses can leave both horse and rider shaken and too frightened to ride on the roads again.

“That’s why we are urging riders to report instances of poor driving they witness, so we can take any necessary steps to increase the safety of horses on North Yorkshire’s roads.”

Inspector Dave Barf, of North Yorkshire Police’s Roads Policing Group, said: “If anyone witnesses driving behaviour which causes concern – such as vehicles passing horses too close, or too fast – I would urge them to report it to us via the online form.

“Every report and piece of footage that is submitted is assessed by experienced traffic officers, and appropriate action taken. This may be the registered owner of the vehicle is contacted by letter to suggest that their driving behaviour be amended to avert possible future collisions. More serious reports may involve a personal visit by police and could ultimately result in prosecution.

“If the anti-social driving behaviour results in an emergency or immediate risk, please use either 999 or 101.”

Last month, the first driver was prosecuted as a direct result of a member of the public reporting dangerous driving on the A19 via the Op Spartan online form. A motorist received a 12-week prison sentence, suspended for one year and was handed a 20-month driving ban. He was also ordered to pay £170 in costs, complete 250 hours of unpaid work and after serving his driving ban has to face an extended driving test.

In July 2016, North Yorkshire Police signed up to the British Horse Society’s Dead Slow campaign, which urges drivers to slow down to 15mph when they meet a horse and rider on the road. Posters highlighting the safety message have been distributed across North Yorkshire.

The Op Spartan driving concern form is available at www.northyorkshire.police.uk/what-we-do/road-policing/operation-spartan/

Updates from Operation Spartan are published on Twitter @NYPOpSpartan

As well as backing Spartan, North Yorkshire Police’s Horse Watch scheme provides security advice and warnings to help equestrians protect their tack and stay safe. To find out more, follow @NYP_HorseWatch on Twitter, or on Facebook at www.facebook.com/nyphorsewatch