Two key town centre shopping streets will be absent of Christmas cheer this year after emerged thier illuminations had succumbed to Town Hall budget cuts. 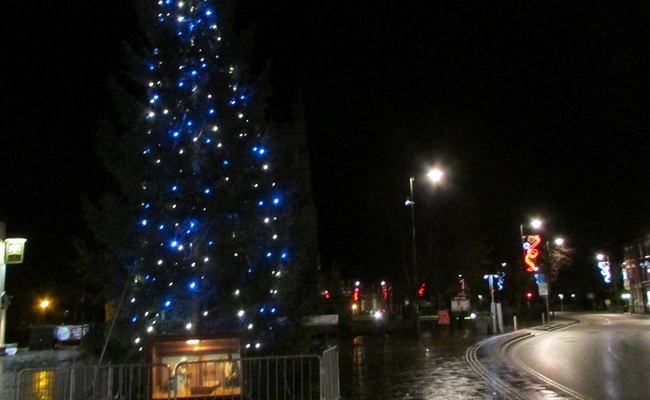 Selby Town Council have confirmed to Selby Online that they will not be providing lights for Selby’s Finkle Street and Micklegate during this year’s festive season as the cash-strapped council finds ways to tighten its belt.

Another casualty of the penny-pinching will be the tradition of installing a Christmas Tree in the square at the southern end of Micklegate, something the Council has done ever since the mid 1990s when the area was given a major facelift.

Instead, businesses trading on both Finkle Street and Micklegate will be encouraged to provide their own festive cheer by creating colourful window displays along the route. A bounty of £100 will be on offer to the Best Dressed Shop Window, judged during December.

But although the Council did confirm to us that the scaling back of the festive display was due to budget restrictions caused by cuts to funding, it twice side-stepped the question of how much money the move would actually save.

It’s not all bad news however, as Gowthorpe will thankfully be immune to the cuts with the usual festive displays snaking along its length from the Scott Road junction, right up to where the high street meets Park Street. It is not known however, if lights will continue onto Park Street this year as usual.

As always, a large Christmas Tree will remain in the Market Place where it will act as the town’s seasonal centrepiece, sitting in front of a magnificent backdrop of Selby Abbey. It will be joined, as it has been in recent years, by a smaller tree in the grounds of the Council’s Town Hall base.

A spokesperson for the Town Council was keen to highlight that the presence of the Town Hall tree will serve to raise money for charity by allowing the sponsorship of its lights. Proceeds raised by the sale of orniment sponsorhip on the tree will be donated to Yorkshire Cancer Research.

The big switch-on is set to take place in the Market Place at 4:00pm on Saturday, November 29th, where residents will be treated to entertainment throughout the day. This will include local school choirs and bands as well as the Taiko Drummers from York. There will also be a Christmas Market with over 35 stalls from 9:00am spread across the Market Place.

Town Councillor and Mayor of Selby, Rosie Corrigan, said, “The Labour run Town Council are encouraging shop owners to bring a touch of festive cheer to Selby this year along Finkle Street and Micklegate. With a prize of £100 up for grabs, we hope to see lots of imaginative and festive displays.

“I look forward to judging the competition”.