A high-ranking member of Selby Town Council has spoken of how 'difficult choices' lead Councillors to slash its spend on the town's Christmas display by more than half. 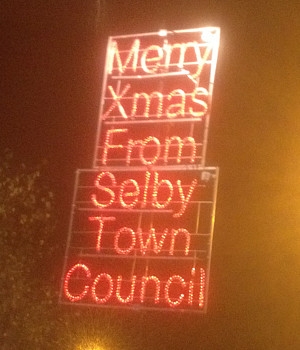 Close to 55% was wiped from the budget for this year's town centre lights when Councillors met to set its finances in October. The significant cut meant the council would spend £13,811 to lease, install and store its lights this year, down from around £32,000 in 2013.

Initial confusion over the reasoning behind this year's smaller display was created when a statement by the Town Hall pointing to a lack of funding was quickly contradicted by a town Councillor who said it wasn't. He pointed to instances of vandalism against previous years decorations alongside ongoing problems with a faulty district-owned electric supply.

But now Selby Online understands that whilst neither of those factors helped the case for lighting Micklegate and Finkle Street this Christmas time, it was indeed the funding aspect that was the primary factor in the decision.

The Council was keen to stress that due to a cut in its annual settlement from the District Council and with no access to money raised through town centre business rates, it had little choice but to tighten its belt in a bid to protect its other services.

In response to our enquiries, the Town Council's Cllr. Melanie Davis (Lab, STC Selby North) told us, "The Christmas lighting scheme was significantly reduced this year following a reduction in our precept funding from Selby District Council who in turn had received a reduction from Central Government.

"Following the information received, all Councillors agreed, with regret, to reduce the amount spent on Christmas lights.

"The cost of the provision of the Christmas lights had risen over the years and was approximately £32,000 last year. We have reduced this to around £15,000 this year.

"We also made cuts in other budgets but tried to ensure that we retained some part of all our services which continue to promote and support the town and its community. We cannot and will not ever please everyone."