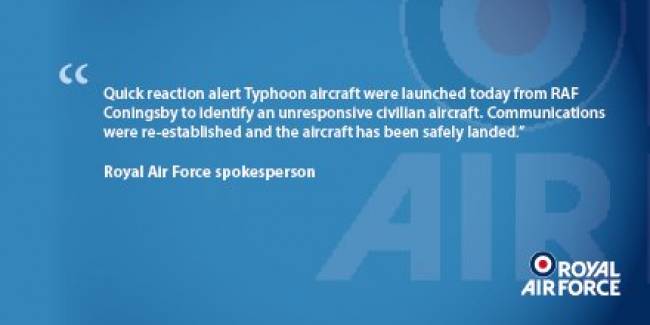 The evening peace over Selby was shattered last night when the deafening sound of two sonic booms rocked Selby and a sizable portion of Yorkshire.

The booms were caused by supersonic Typhoon jets, scrambled from RAF Coningsby as part of the force's Quick Reaction Alert system. The jets were sent to intercept a civilian airliner that had lost communication with the ground while en route between Paris Charles de Gaulle and Newcastle Airport.

Scores of residents from across the Selby area went out onto the street to investigate the 'explosion-like' sounds, shortly after 9:50 yesterday evening.

Social media sites were awash with reports and speculation over the source of the booms with posts flooding in from all areas of the Selby district and beyond.

A spokesperson for the Ministry of Defense later confirmed its jets were responsible for the phenomenon, "Quick reaction alert Typhoon aircraft were launched today from RAF Coningsby to identify an unresponsive civilian aircraft.

"Communications were re-established and the aircraft has been safely landed."

A statement by Air France confirmed the incident was caused by a 'radio communication problem'. They said, "Flight AF 1558, en route from Paris Charles de Gaulle to Newcastle and operated by CityJet had to be accompanied by two British fighter aircrafts according to the procedure.

"The aircraft landed normally in Newcastle at 22h20 (local time). The pilots and cabin crew are trained on a regular basis to deal with this type of incident. For Air France, the absolute priority is to maintain the safety of its clients at the highest level."