£9 Million secured to get Olympia Park back on track 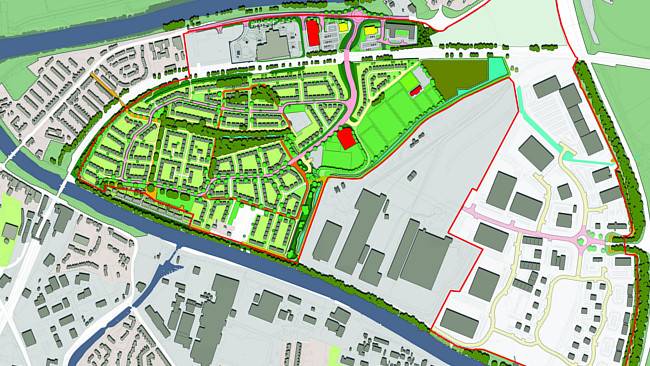 The long-running saga over a proposed Selby development site took another turn today as it was announced the site would receive substantial money from central government.

Selby District Council has secured £8.9m from the government's Housing Infrastructure Fund that it hopes will unlock the development of Olympia Park at Barlby.

Olympic Park, which is identified for a mixed housing and business development, has the potential to deliver at least 1,000 new homes and significant new business space and jobs.  The site forms a major part of the council's long-term plans for the growth of the town.

The money will be used to build a new link road into the site from the A63 Selby bypass, making it easier for future developers to push ahead with the housing and business investment.  Bringing the site up to a standard that enables it to be developed has been a sticking point up until now.

Leader of Selby District Council, Cllr Mark Crane, explained, "Olympia Park is such an important development site for us.  I know that people will have been wondering what’s been going on at the site for some time.  With this significant investment from the government, we'll be able to push ahead with making this site viable for development.

"It's got massive potential for us to deliver new homes and business growth.  The Selby district is the fastest growing in North Yorkshire and it’s sites like this that will help us to meet this need.  Great transport links, affordable business space and great quality housing, market towns and picturesque countryside, all contribute to why people want to live here and invest in business here."

Speaking to mark the announcement of funding for the Selby scheme and others across the country, the Chancellor of the Exchequer, Philip Hammond, said, "Today marks the first step of the multi-billion pound investment we announced at the Budget to help build the homes our country needs.  This fund finances vital infrastructure such as roads, schools and bridges, which will kick-start housing development in some of Britain’s highest-demand areas.  This support will help us meet our ambitious plan of building 300,000 new homes each year and ensure we have enough housing in areas which need it most."