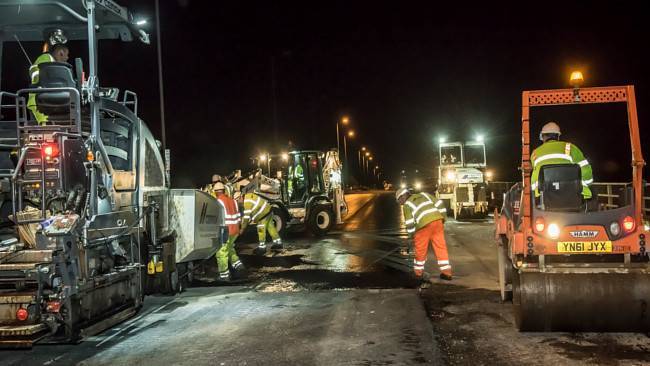 County Councillors are threatening Highways England with court action in a bid to recover £7 million spent on repairing, branding the road's construction 'substandard'.

The A63 was built by tha agency (formerly known as the Highways Agency) in 2003 but was 'de-trunked' in 2009 when it was handed over to the County Council.

A short time after the transfer, the road's surface began to deteriorate badly and was the subject of regular complaints from road users.

Investigations into the cause of the poor state of the road identified fundamental problems with the road structure and, in particular, the lower layers of its construction.

NYCC embarked on a programme of significant structural repairs and resurfaced the whole length of the bypass. The works were carried out over three phases starting in 2015, the repair bill coming in at £7.8 million.

Arguments over the financial liability for the works have been ongoing since the start, with negotiations now locked in stalemate.

County councillors say Highways England initially suggested it would be able to contribute £2.89m towards the costs – a figure branded 'far too little' by NYCC – but now Highways England is refusing to cough up at all.

County Councillor Don Mackenzie, NYCC's Highways chief, said, “We are very frustrated to find ourselves in a position where we have no choice, for the sake of the county’s  taxpayers, but to take direct legal action to recover £7m”

“This is most of the cost that resulted from the substandard construction of the bypass when it was first built.

“We do not want to see significant amounts of public money being spent on legal fees, but as it stands the underinvestment and substandard work funded from central government has directly resulted in huge financial expenditure on the part of North Yorkshire taxpayers and this may have adverse consequences on funding of future work on our highways.

A spokesperson for Highways England said, “We are aware of North Yorkshire County Council’s intentions to pursue legal action regarding the A63 Selby bypass. We will be following the necessary legal proceedings in this matter.”