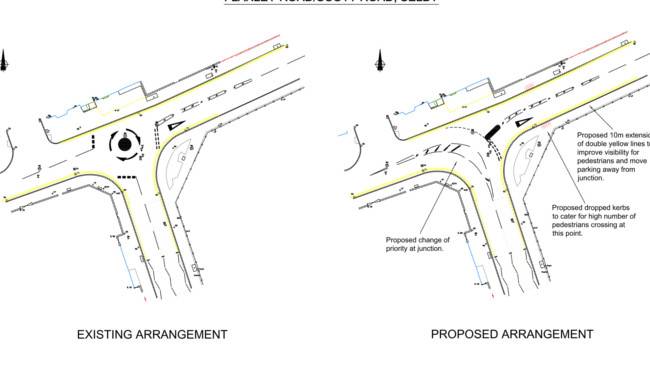 Road users are being asked for their views on proposals for a revised junction layout where Flaxley Road meets Scott Road.

County highways officials want to take action to improve safety at the junction, saying there have been four accidents in the last three years that have caused injuries, plus an unspecified number of near misses or damage-only collisions.

Following analysis of traffic surveys, the NYCC proposes to replace the mini-roundabout with a T-junction that will give priority to the busiest manoeuvre.

To improve safety for pedestrians, the County Council plans to install dropped kerbs where many people cross the road and extend the double yellow lines on Flaxley Road to improve visibility. This amendment to a traffic regulation order would result in the loss of two parking spaces.

County Councillor Don Mackenzie, Executive Member for Highways, said: “We’re aware of numerous incidents at the junction as a result of drivers ignoring the mini-roundabout. We have analysed vehicle and pedestrian movements and the proposed scheme is the result of this analysis. It gives priority to the busiest manoeuvre to help traffic flow as smoothly as possible.”

The plan is to implement the changes later this year, but before that the County Council is inviting views on the proposals. Comments should be sent to This email address is being protected from spambots. You need JavaScript enabled to view it. or posted to Traffic Engineering Team, Highways and Transportation, North Yorkshire County Council, County Hall, Northallerton, DL7 8AH by 31 March, 2018.

County Councillor Stephanie Duckett, a member for Selby Barlby division, said: “Any improvements that can prevent injuries have got to be good, and I’d urge local people to take this chance to have their say on the proposals.”

County Councillor Karl Arthur, who also represents Selby Barlby, added: “I’m very pleased that this consultation is being undertaken and I hope that as many people as possible will respond.  Anything that improves this area and helps reduce the possibility of collisions has to be a good thing.”