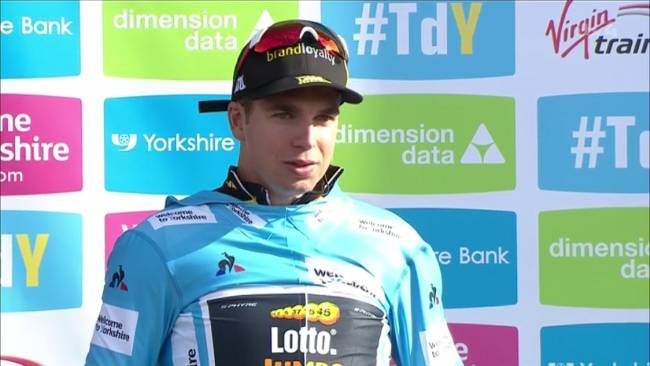 Dylan Groenewegen will be wearing the Tour de Yorkshire's coveted blue jersey tomorrow when the race resumes in Tadcaster.

The Dutchman was first across the stage one finish line in Scarborough on Friday as the LottoNL-Jumbo rider beat Australia's Caleb Ewan into second place.

Tadcaster will play host to the start of the 3rd annual tour's second day, with both men's and women's races starting on the newly re-opened Tadcaster Bridge. Both races will see the riders battle it out on the same 122.5 km (76 mi) route to Harrogate.

The women's race will start the day at 9:15 am with the men beginning their race at 2:05 pm. Both races will be televised on in the UK on ITV4 with additional coverage on pan-European broadcaster Eurosport.

To mark the occasion, Tadcaster is throwing a festival of cycling including hosting the race ambassadors, giving spectators an opportunity to meet cycling heroes and chances for pictures and autographs. The race 'publicity caravan', which gives the crowd a chance to get their hands on race goodies, will also make its way through the town.

Team buses will be stationed on the eastern side of Tadcaster Bridge.  Here you can mingle amongst the cycling stars - keep your eye out for your favourite personalities!