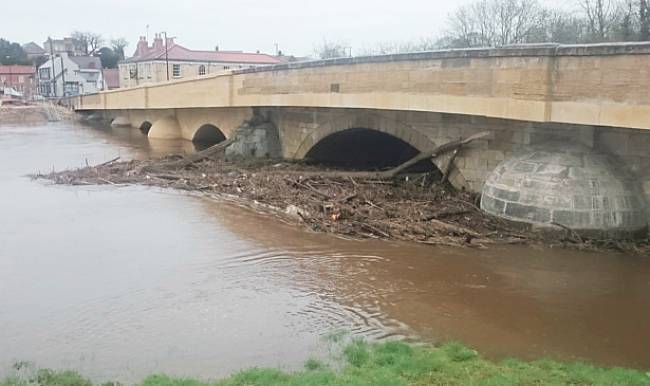 Improvements to Tadcaster's flood defences must be a priority for the town, according to a report into flooding in December 2015.

The flooding, which was caused by heavy rain during Storm Eva, affected 79 homes and businesses and resulted in the partial collapse of Tadcaster Bridge over the River Wharfe.

Tadcaster was split in two following the collapse with bridge repair works taking more than a year before the A659 though the town could re-open.

The report has been compiled by North Yorkshire County Council as lead local flood authority in association with the Environment Agency and Yorkshire Water. It was approved by the County Hall's executive late last month and has now been published online.

The report says the current level of protection offered by the town’s flood defences is low and the risk of a repeat of 2015’s event remains. The Environment Agency is preparing a funding bid for an improved flood-defence scheme and all authorities and interested parties will need to work together to secure additional funding for a scheme acceptable to the community.

Among other recommendations is that the County Council, Environment Agency and Tadcaster Flood Action Group should work together to identify opportunities to improve flood resilience within the town. The report praises the flood action group for being instrumental in improving awareness and resilience since 2015. It has acquired pumps and a digital camera to monitor water levels, developed a community emergency plan, prepared flood packs for vulnerable properties, organised events and disseminated information.

Improvements to drainage that could mitigate the impact of surface flooding should also be investigated by the County Council and Yorkshire Water. However, the report says there are no drainage improvements that could cope with a river flood of the magnitude seen in 2015. The report finds that flood levels were not significantly affected by the partial blockages of some arches of the bridge.

County Councillor Don Mackenzie, Executive Member for Highways, said, “The report has looked in detail at the flooding in 2015 and what further actions can be taken by the County Council and its partners, the Environment Agency, Yorkshire Water and the flood action group, to minimise the risk of a similar event occurring again.

“I am pleased to see that the report has concluded that all partners discharged their statutory duties and that progress has been made since the flooding, and it is encouraging to see the level of commitment and involvement shown by residents. The flood action group, in particular, should be congratulated. There is no doubt Tadcaster is better prepared for flooding as a result of its activities.”

Gary Collins, Flood Risk Manager at Yorkshire Water, added, “After the flooding, we immediately cleaned and surveyed our sewer network in Tadcaster and checked all of our assets in the area to ensure they were operating as they should have been. As a longer-term project, we’re carrying out extensive modelling of how surface water flows through Tadcaster by installing flow monitors in our sewer network. This work will help us to develop our future investment plans for the area.

“As the report states, there are no possible improvements to the sewer network that we could make that would allow the sewers to cope with the magnitude of that flood event. However, we’re committed to investigating if there are any other ways we can help reduce flood risk.”